Healthline: Is It Safe to Indoor or Outdoor Cycling When You’re Pregnant? 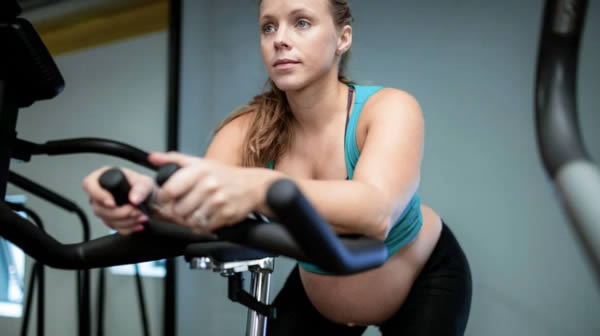 Healthline reached out to Heather Jeffcoat for her advice on cycling when you're pregnant. Read on for Heather's expert advice.

Taking your cycling to the street or trails is a bit more dicey than exercising indoors. That’s because there are variables you can’t control.

The biggest risk with cycling outdoors is the risk of falling, leading to abdominal trauma,” she says. That’s why she advises her patients to stop cycling after their first trimester.

During the first trimester, Jeffcoat says to make sure to avoid knee hyperextension with all jumps and standing positions.

The first relaxin peak occurs around 8 to 12 weeks, and this is especially vulnerable for a pregnant women’s ligaments,” she says.

If you have a history of pubic symphysis dysfunction, also known as pelvic girdle pain, Jeffcoat says you should avoid quick maneuvers, such as 2-count jumps, as they will put additional strain over this area.

During the second trimester, Jeffcoat says that as long as there’s no pain, you can generally feel unrestricted on the bike — but always keep enough resistance to avoid hyperextension.

Want to know more about cycling when you’re pregnant? The full article can be found here.